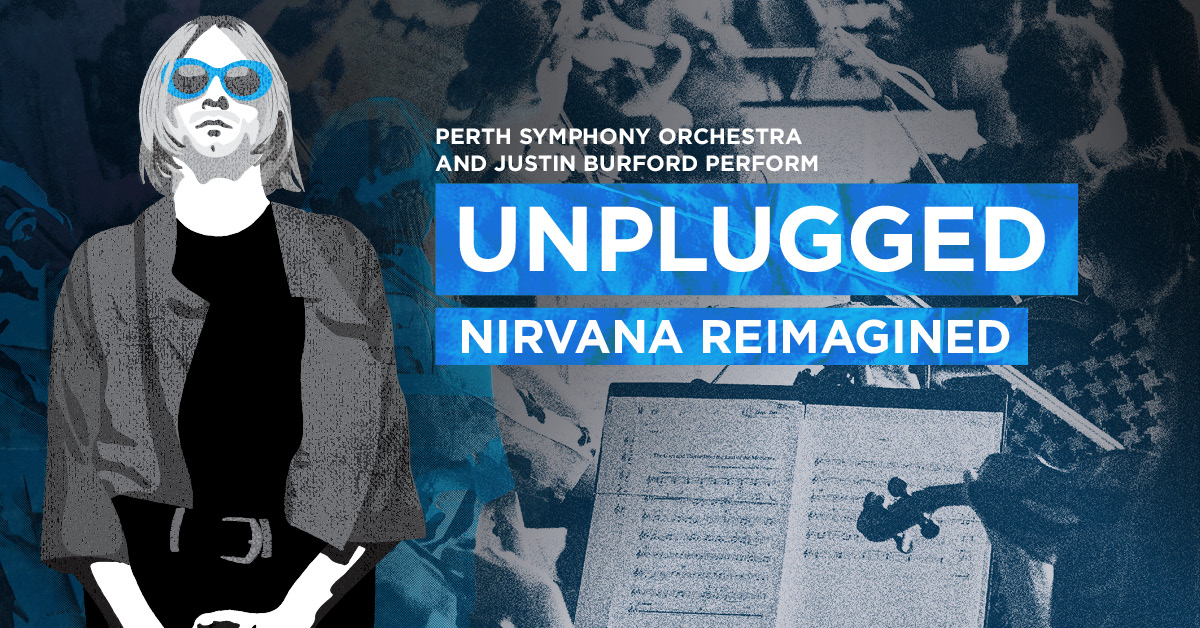 THE MUSIC OF NIRVANA, REIMAGINED FOR SYMPHONY ORCHESTRA

Tickets on sale now via ticketek.

In the year Kurt would have turned 50, Perth Symphony Orchestra presents a concert event unlike anything seen before in WA. Or anywhere, for that matter.

This isn’t Nirvana with strings. Prepare to witness a fully-fledged orchestra in bloom, transformed for one night into a raging rock beast.

Already regarded as “the orchestra that breaks rules” for their radical reinterpretations of everything from Beethoven to WA’s greatest ever songs at RTRFM and the WA Museum’s flagship event A Moment in Time, Unplugged: Nirvana Reimagined will take orchestral sounds to some heavy, heavy places.

Using Nirvana’s legendary MTV Unplugged in New York as inspiration, which took place just five-months before Kurt’s untimely death in 1994, PSO will take songs from the concert and from throughout Nirvana’s discography and blow them up.

Imagine About a Girl and Where Did You Sleep Last Night backed by a wall of sound big enough to match the angst in the songs. Picture Smells Like Teen Spirit and Lithium pushing the year punk, alternative and grunge broke through, 1991, into the stratosphere.

Unplugged: Nirvana Reimagined will not only take you back there, it will remind you of music, culture and a generation changing forever.

Joining PSO is award-winning songwriter and the veteran of sold out Nirvana reinterpretations from Melbourne to Perth, Justin Burford. Fresh from a return tour with End of Fashion, one of the greatest voices WA has ever produced will lead the concert alongside conductor Jessica Gethin, and no one nails Kurt quite like him.

Burford and PSO have bandied together to reveal their most ambitious show ever. This is a dream event for the artists and Nirvana fans alike. 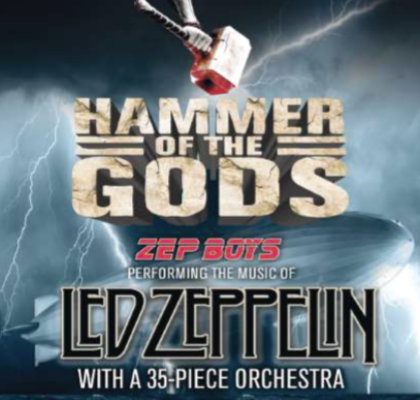 HAMMER OF THE GODS

Hammer of the Gods brings classic rock to the Crown Theatre Perth on Saturday 20 May in an epic salute to Led Zeppelin, unleashing a 35-piece orchestra (organised by North Street Music) and powerhouse icons, the Zep Boys, in an exhilarating concert of symphonic majesty, dynamic rhythms and breathtaking vocals.

For 3 decades, the Zep Boys have flawlessly dedicated their careers to the Led Zeppelin catalogue and their intoxicating performances have thrilled legions of fans mesmerised by the hard rock, blues and psychedelic legacy of one of the most influential groups of all time.

Hammer of the Gods is seriously hard and sensual rock played to authentic, thumping scores by a 40 piece ensemble as vocally aggressive as it is orchestrally magnificent.

Don’t miss your Led Zeppelin experience with the Zep Boys, accompanied by a 35-piece orchestra at Crown Theatre Perth on Saturday 20 May.

Tickets are on sale from 9am on Thursday 17 November through Ticketmaster on 136 100 and www.ticketmaster.com.au.

Song Lounge is one of Perth’s favourite singer/songwriter showcases where top local artists perform their originals in a unique and intimate setting. Join us to hear them share the stories behind their songs, songwriting experiences and hilarious tales from their tours – be taken on a journey with Perth’s finest talent.

Natalie Carmody  is a Fremantle based indie/folk/pop/soul ukulele songstress. Although she is still new to song-writing and performing, her song Call Your Spirit Back was shortlisted in the Australian Songwriters Association National Song-writing Contest 2015 (Folk Acoustic category), 7th place in Indie International Song-writing contest (Folk category) 2015/2016 and was shortlisted for Your Music Out Loud in the USA Song competition 2015. She has performed with the beautiful world music vocal ensemble Tendera in the 2016 West End Weekender as a part of the Fremantle Street Arts Festival and has opened for and accompanied various Fremantle musicians. Her song Fallen in (Coolest stream) was signed in 2016 in a non-elusive publishing deal for TV, film and advertising in the US. Natalie is opening for Carus Thompson’s epic Christmas show at Clancy’s Fremantle on December 19th, intends to audition for WAAPA and release a single in 2017. This newcomer to music is one to watch!

Jake of Spades is Perth born and raised new school loop artist.He mixes folk with acoustic percussion and beat boxing to put on a live show like no other. Since he learned guitar from a young age, he has taken influences from the Red Hot Chili Peppers, Two Door Cinema Club and City and Colour, shaping a truly unique sound.He refers to himself as ‘A one-man band’ with a twist.

He hopes you enjoy the show as much as he enjoys playing it!!

Dubbed as “Perth’s Next Pop Princess”, Kimberley has been making a name for herself around Australia with her soulful voice, supporting some of Australia’s biggest pop acts on tour. Her acclaimed versions of “Stay” by Rihanna and “Clarity” by Zedd leave no doubt that this is one talented young singer. Her transition from the breezy suburbs of Perth to Melbourne characterizes this young artists debut who is now stepping up as headliner…

TASHI  As quoted by The Music, TASHI “might be something of a phenom.” Her music is the type that makes you want to get up and clean the house, with its notoriously addictive hooks and original style of alt-pop/rock/reggae. Named “crowd favourite” at Hidden Treasures Festival 2013, and a highlight at Nannup 2015, Tashi has also been described as a young performer with the world at her feet, and with a stage presence and musicianship far beyond her years, she is one not to be missed.

Sydnee Carter It’s a rare find when someone turns up that’s so different that you can’t liken them to anyone else already out there. Such a find is 18 year old Sydnee Carter from Perth Western Australia.As a singer/songwriter, her lyrics display a depth of emotion and worldliness beyond her years, the tone of her voice so unique it can’t be likened to anyone else and her style, so ‘ true only to herself ‘ that you can’t help but love what Sydnee Carter has to offer.Sydnee released her debut EP in February 2015, since then her fan base has increased dramatically on all her social media platforms (48K), sales internationally including UK, Europe, Norway, Sweden, USA and Canada and over 2.5 million streams to date on Spotify. In 2015 Sydnee’s song writing ability was recognised when she competed and made the grand final of the Telstra “road to discovery” a national competition for up and coming song writers. Sydnee is currently studying at WAAPA and performing on a weekly basis, the last six months have seen her working on her new EP with Julian Sudek from Sydney, the EP is due out shortly.

Nat Pearson is an upcoming Australian pop-country artist, gaining attention for her emotive dynamic vocals, and girl-next-door charisma.Fun, easy-going and ambitious, Natalie’s warm personality will make you feel like you’ve known her forever.Her debut pop/country track ‘Senseless’, carried her straight to the Top 10 Pop Artists in the Australian Independent Music Awards (MusicOz) in 2013. She was voted WA’s RAW: Musician of the year in 2015, and recently opened for Jessica Mauboy and Nathaniel at their Perth show, and performed alongside Jason Ayres to support Tex Perkins and Mental as Anything on their WA tours. Nat Pearson has recently released her brand new pop-country track – “Chance at Love”, available now on iTunes, with a video out for release soon.

Helen Shanahan is a 27-year-old singer/songwriter from Perth, Western Australia.Helen’s songs ride the joys and sorrows of love and life and draw the listener into an articulate and heartfelt world of story, melody and guitar, through her eyes. Helen’s thoughtful observations and introverted reflections of everyday situations are beautifully captured in her music, which can best be described as contemporary folk/pop with a strong acoustic feel. She  has won the song writing award in the national competition ‘Telstra Road to Discovery’. This competition has seen Helen play at the Forum Theatre in Melbourne, the Tamworth Country Music Festival, Canadian Music Week, BIGSOUND festival in Brisbane, Queenscliff music festival, iconic New York bar ‘The Bitter End’, and the Americana festival in Nashville. Helen has just been signed to Mushroom Music Publishing, on the back of releasing her new EP ‘Finding Gold’ produced by Melbourne based Pip Norman aka ‘Countbounce’.

Song Lounge is one of Perth’s favourite singer/songwriter showcases where top local artists perform their originals in a unique and intimate setting. Join us to hear them share the stories behind their songs, songwriting experiences and hilarious tales from their tours – be taken on a journey with Perth’s finest talent.

Madi Henry is a young 15-year-old girl; whose voice is well beyond her years. She is a talented singer/songwriter who has recently won WAM Song of the Year U14’S category with her song Stronger. She is an up and coming talent to look out for with her heartfelt, emotional performances.

Ella E is an up and coming indie-folk artist, who at 16 years of age has already got her foot in the door. A passionate, determined, self- 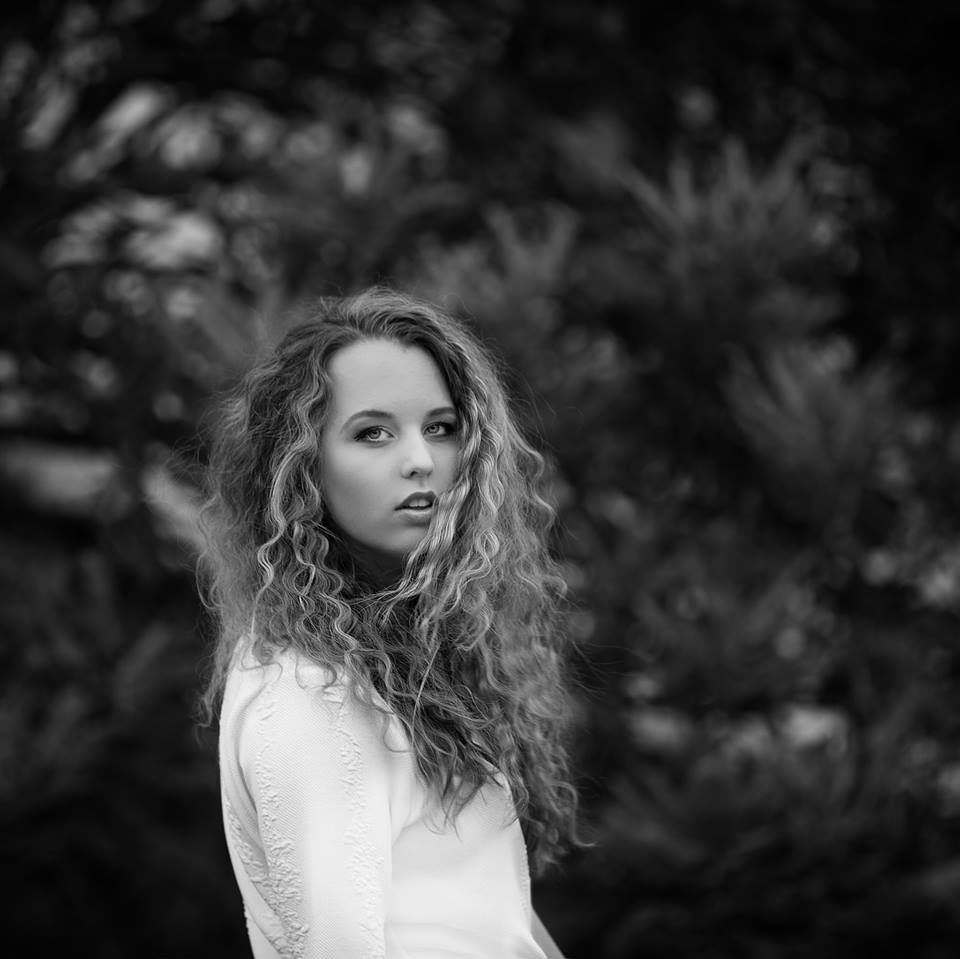 aware teenager, Ella started writing music at age 12. In 2015 she launched her first EP “Letters I Never Sent” to a sold out audience and in February 2016 was pleased to support Missy Higgins at her Fremantle concert. As a regular at North Street Music’s Song Lounge, she is looking forward to sharing some of her new music with you.

Nyanda J Jessica Nyanda Moyle otherwise known as ‘nyanda j.’ is a singer songwriter who draws upon a wide array of influences to create her music. Combining pop-orientated melodies, rhythmic guitar playing and visceral vocals to tell and relive stories that are honest and relatable. 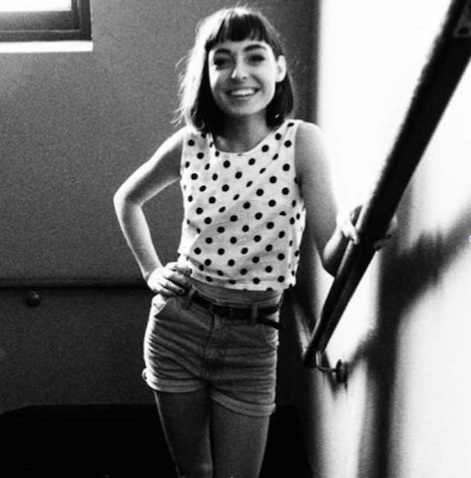 Stella Donnelly is currently recording her debut EP at Villanova Studio in Perth and she has decided to give everyone a sneak peak of what is to come.Stella’s conversational and honest lyrics combined with folk and pop sensibilities will be performed in the intimate setting of Perth’s favourite jazz club.

No shows booked at the moment.